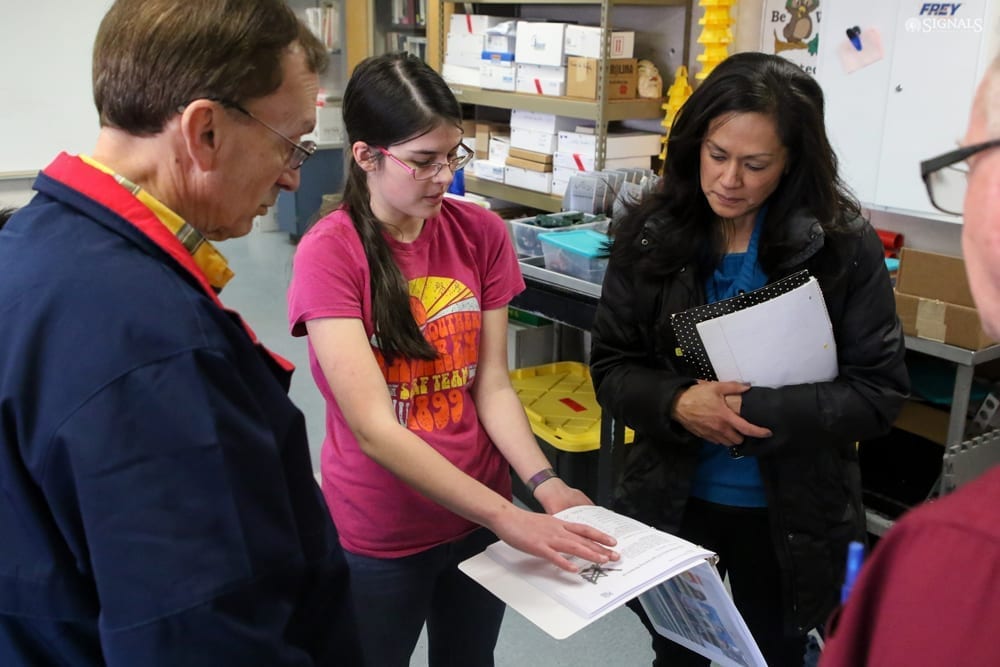 When Chino Valley High School teacher Steve Booher was a kid, he loved robots. So when he attended a grant opportunity meeting where $1,200 was offered to start a STEM program at the school, he knew the perfect use- robots.

Robotics has a strong presence in today’s industry; being utilized for a variety of tasks in factories, in the home to vacuum the floor and many other interesting uses. The potential of robotics in the future is bright with self-driving cars, which are currently being tested, just one of the fascinating possibilities.

“We get these kids into coding, designing and repairing (robots),” Booher said. “If they choose to go into it now or later, they’ll have that foundation because robots will just keep growing in the world.”

Using the grant, Booher was able to purchase one robot kit.

Now four years later, students ranging from middle school age to high school seniors get together in a classroom at the school for two hours, twice a week to build and program four robots.

Students of Varying Ages Gather After School to Build Robots

Katie Hanus, a home-schooled student, has participated in the program for three years.

“It has given me a chance to work with a team, something that I don’t get a lot of experience with which I think will be beneficial throughout my life,” Hanus said. “I like the challenge and I like being able to work with my team to complete a goal.”

Funded by Community Donations and Grants

The club is operated completely on donations and grants. In addition to the original grant, the Chino Valley High School Robotics Club has been aided by the individuals due to its tax-credit status and through organizations like the Jewish Community Foundation of Greater Prescott, who recently provided the club with a $3,800 grant.

“They approached us with a grant request and it was a very interesting request because this is the future,” Jewish Community Foundation of Greater Prescott Executive Director Christine Resnick said. “This is what the kids need to move forward and to be competitive in the current industry. We had to fund something like this.”

Booher said the grant received by the Jewish Community Foundation went toward the purchase of a whole new system for all the robots, which includes a touchscreen and smart motors. The smart motors keep track of temperature and can precisely measure the distance traveled, allowing students to program the robot’s exact movements.

In addition to the new system and parts, funds are utilized to enter monthly competitions. Booher said each competition costs $50 per team to sign up for. Entering the school’s four teams cost $200 each per competition in just entry fees. In addition, to register a team is $150 for the first squad and $100  per each team after that to register for the year. This costs and an additional $450.

These monthly competitions, that start in November, leading up to the state competition in March and the “World Finals” in April. Booher says a challenge is presented for the competition and students have a year to complete the project. Booher says the Chino Valley High School Robotics Club has yet to make it to “Worlds”, but has made it to state two years.

At previous competitions, Booher said the Chino Valley High School Robotics Club has won a design award based on the team’s design notebook, a few tournament championships, and skills championships as well as two Excellence Awards, which Booher mentioned is the highest award that can be achieved.

Students Work Together as a Team for a Common Goal

While learning about technology, Booher says the club also helps the students with teamwork as some kids focus on building and driving while other students like to code.

Resnick and David Hess, President of the Jewish Community Foundation of Greater Prescott, witnessed this teamwork first hand when the two visited the club. They observed students working together and were even shown a couple of demonstrations of what the club has been working on.

“Super impressed with these kids,” Resnick said. “The fact that these kids are working together toward a common goal and they seem to be able to communicate, to document all of those things they need to function beyond these walls and beyond this community.”

Booher says the community support has been awesome and he looks forward to continuing the program in the future.