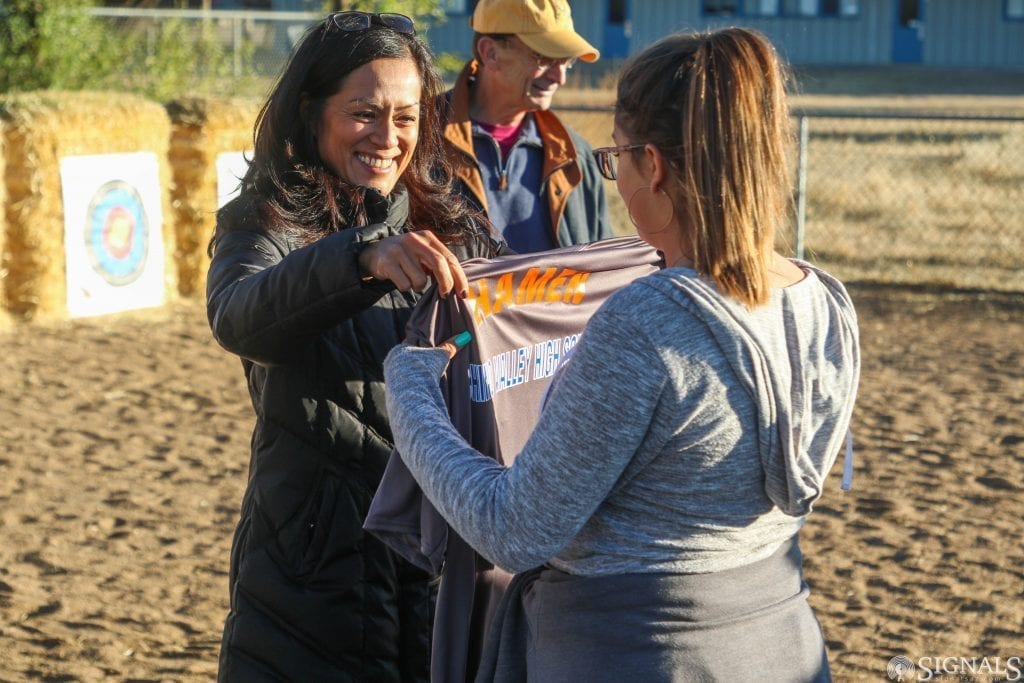 Over the past few years, the sport of archery has been popular at Del Rio Elementary School and Heritage Middle School in Chino Valley. However, kids who enjoyed the precision focus nature of the sport could not continue enhancing their skills at the high school level. That changed last year when coaches Aaron and Edie Hulburd brought archery to Chino Valley High School.

“I wanted to make a high school program to give these kids an opportunity because it was really catching on,” Aaron said.

In the first year at the high school, eleven archery players borrowed equipment and a field from Del Rio Elementary School. In addition, the team was one player short to be considered a team. This resulted in the players competing individually at tournaments.

One year later, the Chino Valley High School archery team has over twenty players, their own field with targets, equipment, a shed to house the equipment and jerseys thanks to a nearly $10,000 grant from the Jewish Community Foundation of Greater Prescott.

“It’s so nice to see these young kids in a sport that is growing,” Executive Director of the Jewish Community Foundation of Greater Prescott Christine Resnick said. “The sincerity on their faces, the pure joy. I don’t think you can put a price on that quite honestly and for them to be so appreciative of it, why wouldn’t you do it.”

The grant supports a team that already witnessed success in year one as sophomore Kyle Smith gained a $750 scholarship from his performance.

“Archery has been my thing, I’ve been shooting since I was three-years-old,” Smith said. “This is a game and fish event and my dream job is game and fish. So this would be an excellent thing on a resume for game and fish.”

Meanwhile, the team is also inheriting talent from the elementary and middle school archery teams.

Freshman Shawn Powell won the state championship for archery last year at the middle school level. Last year was the first time he played the sport.

“I picked up the bow for the first time (last year) and I started really enjoying it,” Powell said. “It just took a lot of practice. I practiced every night when I got home, just flinging tons of arrows.”

Powell’s success shows the unique nature of archery, a sport where the same bow can be used from fourth grade on and one can be successful with enough focus and determination.

“It definitely requires a lot of focus, it’s a huge mental sport,” Aaron said. “It’s all about consistency and repetition. You’ve got to be able to do the same thing every time. You’ve got to really work on form and technique with the kids.”

“You’ll see brand new kids that have never shot before that are willing to learn become excellent archers,” Aaron continued.

In addition, the sport of archery lends itself to individuals with varying types of physical attributes.

“It’s probably the most diverse sport,” Edie said. “You will have the more athletic type, but then you’ll also have students that haven’t found their niche in anything else. This is really a great family environment, we emphasize the team and working together and just creating a place where everybody feels like they belong.”

Young people finding something they are passionate for, such as archery, is important to Resnick.

“The coaches are enthusiastic about archery and to have kids be involved in an activity is fantastic,” Resnick said. “I think it’s really important to have an outlet, whatever that is. In life, you have a journey where you have to discover what that outlet is. So if you come out here and you can find that this is your outlet, this is something that you can take with you for the rest of your life.”

Now with the required amount of players to be considered a team, along with their own field and equipment, Chino Valley High School’s archery squad looks forward to continued growth and success at tournaments.