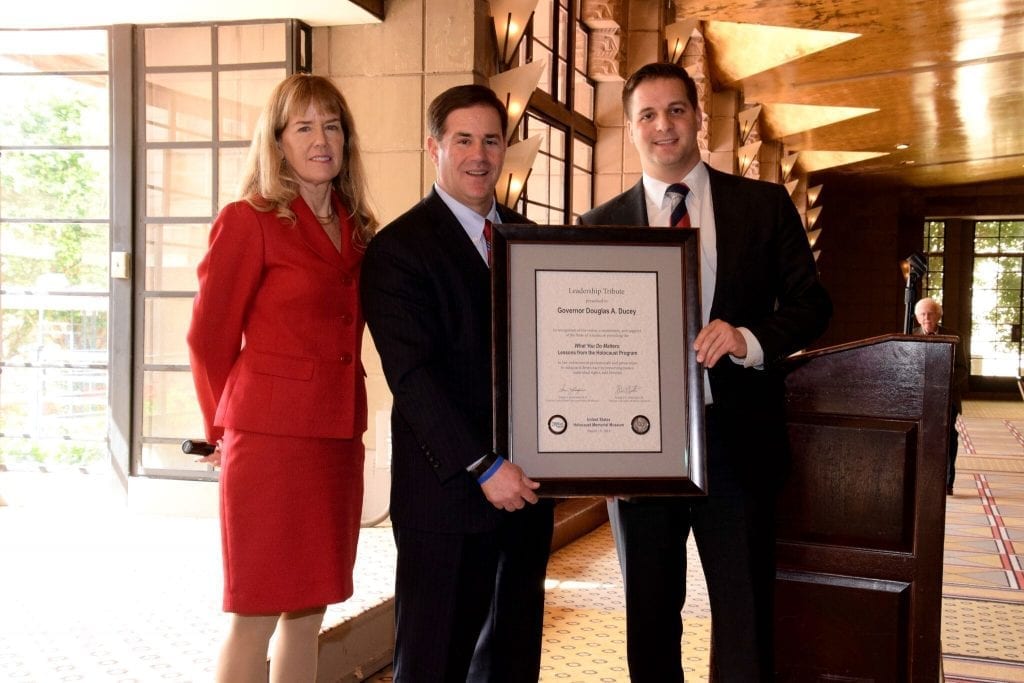 On March 15, 2018 at the Biltmore Conference Center in Phoenix, the Jewish Community Foundation of Greater Prescott hosted a law enforcement conference attended by the chiefs and command staff of more than forty law enforcement agencies from across the state. The conference featured a morning executive leadership program followed by a Tribute Luncheon. At the luncheon, Marcus Appelbaum, the United States Holocaust Memorial Museum’s Director of Law, Justice and Society Initiatives, presented a Leadership Tribute to Arizona Governor Doug Ducey who accepted it on behalf of Arizona’s law enforcement professionals.

In presenting the award, Mr. Appelbaum stated, “I represent the Museum in acknowledging your contributions to preserving the memory of those who perished during the Holocaust and your efforts in ensuring the Lessons of the Holocaust are never forgotten.” Director Appelbaum went on to say: “Never before in the Museum’s 25-year experience have we witnessed such a diversity of organizations working toward a dedicated goal of disseminating the Lessons of the Holocaust.  What the Museum has observed in Arizona is truly unique.”

The program is a 3.5-hour interactive course during which participants examine policing within the political and legal framework of Nazi Germany. To date, Polk and her team have trained over 4000 law enforcement officers and prosecutors in Arizona.

When asked about the national recognition of the What You Do Mattersprogram, Dr. David Hess, president of the Jewish Foundation, stated: “Never in our thinking, did we ever foresee that our trip to the Holocaust Museum in 2006 would have such a profound effect. What Sheila Polk and her partners in law enforcement have accomplished in Arizona is truly amazing.”