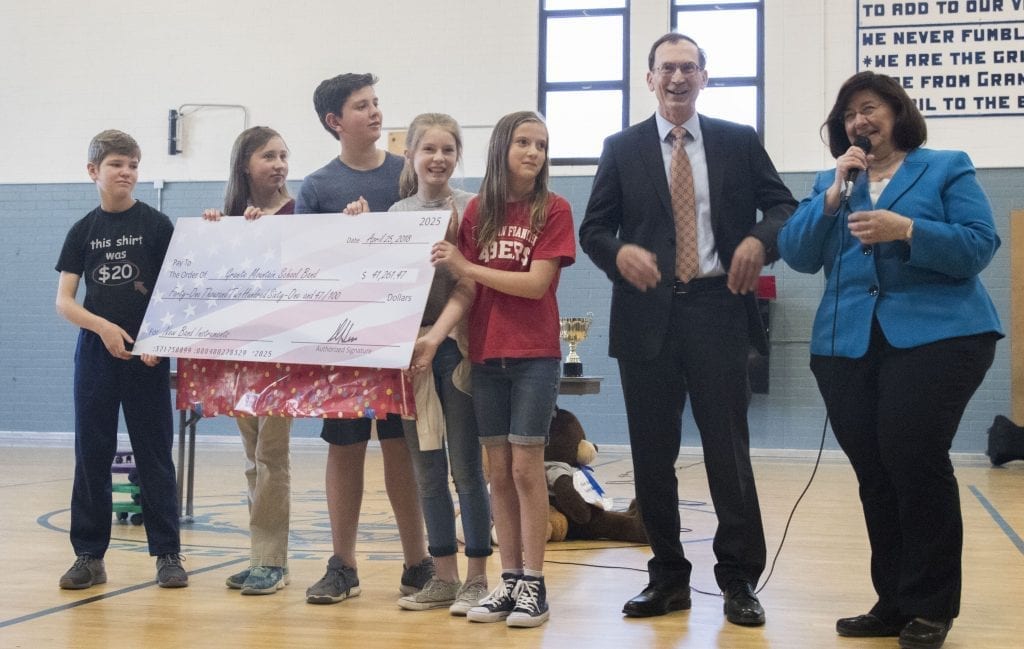 On Wednesday afternoon, April 25th, Granite Mountain Middle School held an assembly to honor the completion of the school’s fundraiser to buy new musical instruments for the 5th and 6th-grade students. The Jewish Community Foundation donated $41,261 dollars in order for the school to reach its goal. The money donated by the organization was just a part of the $117,261 total donated by the Jewish Community Foundation of Greater Prescott to various school projects in the area.

“It’s a great feeling for the Jewish Foundation because I think all organizations and everybody in our community realize the youth – the students – are the future,” Jewish Community Foundation of Greater Prescott President Dr. David Hess said. “As a community, we need to support them in every way we can whether it’s in school, band, clubs that they have or other activities.”

Granite Mountain Middle School has been raising funds for months to purchase new instruments and by spring, the boosters were still short. That is when Hess reached out to Band Instructor Luan Mueller. Hess wished to come visit the school and Mueller’s band students.

“It was very infectious, just a great bunch of people…really loved the music,” Hess said. “We could see how aged the musical instruments were and so we wanted to make it happen so that come August when school starts again, they got all new band instruments.”

During the assembly in front of hundreds of kids, a member of the band revealed the amount donated by the Jewish Community Foundation of Greater Prescott. What followed was a boisterous cheer and a standing ovation from individuals in the gymnasium.

“It’s clear from the way that the kids reacted in the audience today, it was really a good thing to do,” Hess said.

It was fitting for Mueller that the announcement and celebration took place on the Granite Mountain Middle School basketball court, as she compared the fundraising effort to a game of basketball.

“When you are watching a basketball game, there is a lot of people scrambling down there on the court and they are all working to make that basket,” Mueller told those in attendance Wednesday afternoon. “When you are watching a basketball game, you are not sure who is actually going to shoot it, but they are all working together to get the ball down into the right court and up into the basket to score.”

“We got a swish,” Mueller continued.

Hess loves the quad cities and believes the area should be great in every aspect, especially the schools. Considering the low funding of Arizona schools, Hess is hoping other organizations help out in order for schools to be the best they can.

In addition to the money donated to Granite Mountain Middle School, $40,000 was donated to the ASCEND School for new computer tablets and software as well as funds to refurbish school buses used for field trips and money to provide scholarships for families in need.

Furthermore, $36,000 was given to Mountain View Elementary School in Prescott Valley for the school’s adaptive playground.

“Everyone in the community should step forward,” Hess said. “We would like to set an example and so we are hoping what we did today would get infectious and people will pick other schools and do projects.”

Information regarding Jewish Community Foundation of Greater Prescott partnership opportunities and charitable programs can be found by contacting the organization at (928)-771-3737 or online at www.jcfgp.org.